The igniter element in a pellet stove is designed to automatically light the pellets when the control board sends an electric signal. Igniters come in many shapes and sizes depending on the make and model of your pellet stove, but they all transform electricity into heat. Some igniters make direct contact with pellets, while others preheat the air circulated into the burn pot.

Igniter failure causes great frustration because pellets tend to be difficult to light manually, and continuous operation of the stove requires more supervision to ensure the pellets remain lit. Follow these steps to identify the source of the issue and get the igniter operating again.

Tools You May Need:

•  A power strip with a switch on it

1. Does the igniter heat up?

Look for the igniter to glow cherry red like this: 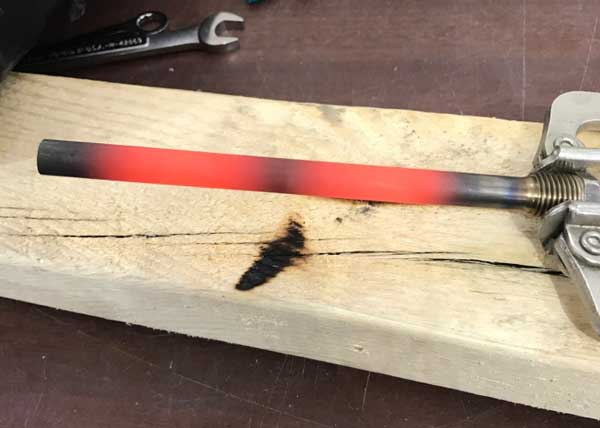 Please note that some igniters have a cool tip and might not change color all the way to the end.

Sometimes the igniter tube will bubble or bend and a simple visual inspection reveals that the igniter needs to be replaced.

Use a multimeter to measure whether the igniter is receiving voltage at the wire connections. Igniters require 115-120 volts to cycle on.

If no power is present - Use the wiring diagram in the owners manual to locate the circuit for the igniter. Start from the igniter wires and work backward to the power source to determine where the breakdown occurs.

3. Does the igniter have continuity?

Continuity - If something is continuous, an electric current can flow freely from one end to the other. The multimeter should indicate that there is continuity through the igniter. No continuity indicates that the wires of the igniter have been damaged.

Resistance - Measured in ohms, resistance quantifies how well an electric current flows through a circuit. Set the multimeter to measure the lowest value of resistance and connect the red and black terminals to each end of the igniter wire. A good igniter should register 30-60 ohms of resistance when cool.

How to Bench Test an Igniter

If you do not have a multimeter on hand you can perform a bench test instead. Testing a part outside the stove is known as a bench test. This isolates the igniter to test its performance independently from the rest of the stove.

Next Article in Topic

Not finding what you're looking for? Contact Us Directly